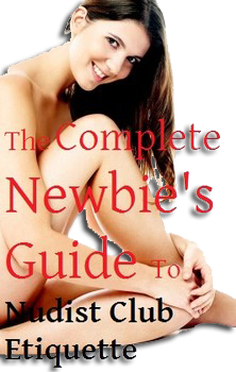 ﻿Don't gawk or stare at others﻿.
Experienced nudists understand that natural curiosity comes into play when someone is new to social nudity and are tolerant of that. But after a brief transitional period, people at social nudist gatherings are expected to make eye to eye contact only.

﻿Respect the privacy of others.﻿
Always avoid personal questions altogether like asking people where they work, where they live, etc. If a person feels comfortable in divulging that sort of information fine, but it is never okay to ask.

﻿Don't engage in lewd behaviour.﻿
Any public overt sexual activity is always considered inappropriate in an atmosphere of family-friendly, nonsexual nudity. That includes inappropriate touching of others as well as self. While other minor mistakes pertaining to etiquette might earn a correction or even be overlooked, violating this one will likely garner a quick invitation to leave the premises.

﻿Nude when and where appropriate.﻿
Regardless of the type facility, first timers will be allowed some time to feel comfortable without being pressured to get nude immediately. Actually people find it easier to get naked than they expect because being the only clothed person in a nudist setting is just about as uncomfortable as being the only naked person when everyone else is fully dressed.

﻿Know and follow all club or resort rules.﻿
Each club will likely have rules for guests and members. The rules will be explained verbally during orientation and generally you will receive a written copy. Rules may include some of the things covered here under etiquette but will also address things like alcohol consumption, where use of tobacco products is permitted if applicable, rules regarding cameras and camera phones, etc. Usually it isn't a long list or hard to remember but during the visit if you aren't sure about something, just ask someone. Even first time guests are expected to know and follow all club rules.

﻿Talk, Listen and mingle.
Be friendly, pleasant and mingle. Even if you tend to be something of an introvert don't just keep to yourself. You will find nudists a very friendly and in most cases outgoing bunch. Being a good listener is as much a part of being a good conversationalist as doing the talking so it is fine if you would rather listen than talk, just contribute. When it comes to mingling in any social situation, a wise person once said you should always act like a host rather than a guest and conduct yourself accordingly. ﻿